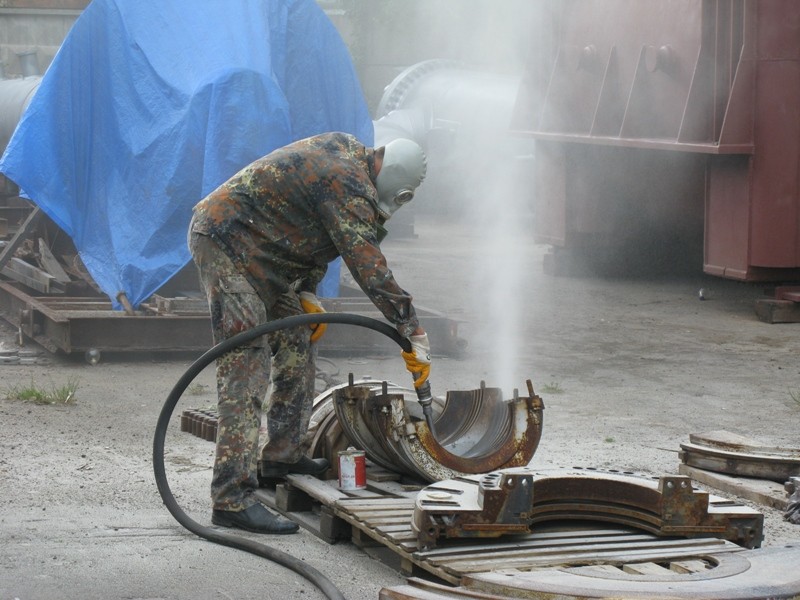 The history of creation and analysis of the advantages of the Ukrainian conversion product in comparison with foreign ones for cleaning building structures and technological equipment from corrosion products, scale and various kinds of pollution is given.

For the first time in the world, on the instructions of “Yuzhnoye” Design Bureau (Dnepr city), the Kh-77U product, an analogue of the “UkrTARI” abrasive blasting machine, was created. The material is intended for the famous “Voyevoda” missile, according to the classification of the US Defense Ministry – SS-18 Mod.1,2,3 Satan (Russian. “Сатана”). A heavy rocket weighs 211 tons and needs at the start of an additional thrust impulse. As a fuel, asymmetric dimethylhydrazine (UDMH) is used, and the oxidizing agent is dinitrogen tetraoxide(AT). The afterburner of the 15D7E engine is produced by solid fuel based on aluminum powder. It is fed into the combustion chamber by a supersonic jet AT, which provides a stable and adjustable flow rate from 10 to 375 kg per second. Attempts to adapt the sandblasting apparatus of the international leader “CLEMCO” were unsatisfactory: it is possible to disperse abrasive particles to a speed of only 40-70 m / s (according to TORs – not less than 400 m/s), the ratio between the dispersed and dispersive components is 0.1 -0.2 , and most importantly – unremovable low-frequency ripple. Therefore, the need arose to create a simple, reliable, compact system for precision dosing, supersonic dispersion of solid fuel particles, concentration and focusing. The results exceeded the most optimistic expectations. The monoblock version of the R-36M missile was put into service on November 20, 1978, and five years later there were 308 reliable “Voevoda” missiles. Now there are 58 left, and which only after 2020 will be removed from combat duty if Russia and the United States ratify the Prague Treaty.

In the United States, after 31 years, in 2009, ground-based fire tests of a solid-fuel engine based on water ice and finely dispersed (about 80 nanometers) aluminium powder were passed. Today, NASA considers this mixture as a very promising (especially because of safety and low cost) alternative to solid fuel.

The latest developments in 1979 for the X-77U product are presented in the form of an application for an invention with a concise and comprehensive formula: “The air mixture is fed into the combustion chamber of a liquid rocket engine into the ignition zone of the fuel mixture in the direction of movement of the latter.” The examination confirmed a significant novelty and assigned the name of the applicant to high-speed technology. Received copyright certificate with the stamp: “Not subject to publication in the open press”, which is re-filed in patent SU No. 1148209 “Method of thermoabrasive treatment of Galchenko”. The closed invention was declassified in 1985, after which the latest technology and device for its implementation is widely used in the national economy. The high-speed cleaning technology and the abrasive blasting machine “UkrTARI” are protected by nine more patents SU 1089876, Ukraine: 6318; 78,687; 88152, Russia: 2248871; 2338638, Bereich Deutschland 09-1605, Euro. EP 1652621 B1 and PCT WO 2005/023729 and have been awarded numerous prizes: a gold medal at the First International Exhibition of Inventors in 1985 (Plovdiv) and at the World Salon of Inventions in 2006 (Geneva), ahead of 1000 developments from 45 countries! Scientists and Industrial Complex “OGNEMASH” and Bauman Moscow State Technical University (Figs. 1 and 2) was awarded a special prize of the Ministry of Science and Research of Iran for the dual-purpose development “Method for thermoabrasive cleaning of products and a device for its implementation”. The development is based on physical and mathematical theoretical calculations and virtual modeling of complex aerodynamic processes on the “Adams” software package.

It was established that the abrasive accelerator must be taken in the form of a barrel 30–120 gauge long and the dispenser should be made with an acoustic broadband generator, a multi-circuit vibration exciter, an annular ejector, an activator, and a centrifugal dehumidifier. A two-component high-speed jet is formed by feeding abrasive particles into the gas stream to a mass ratio of dispersed and dispersive media in the range 0.7 ÷ 0.9. The required proportion is provided to provide a self-regulating pneumatic system, increasing vibration while reducing gas flow in the jet supplied to the material pipe, because with a decrease in the amount of gas passing through the activator, the vibration and acoustic impact increase, which increases the intensity of the dispersed component, due to a decrease in the friction forces between the abrasive particles. The maximum number of abrasive particles is supported by acoustic exposure and vibration with a dispenser oscillation frequency in the range 500–1000 Hz and an amplitude of 0.3–0.7 mm.

To download the full product catalog, please provide information about yourself:

To request a price, please leave information to yourself